Herga Lodge No 2548 was consecrated at Harrow House, Harrow-on-the-Hill, on the 16th February 1895 by the then Provincial Grand Master of Middlesex, RW Bro the Rt Hon Lord George Hamilton, MP, PGW, who was accompanied by a team of 6 senior Provincial Officers.

There were 20 Founders (only 19 of them were in attendance), of whom 5 were Past Masters, and there were 37 visitors, making a total of 63 in attendance. Following the Consecration, W Bro Edmund R Bartley Dennis was installed as the first Master, serving for 2 years, and he appointed VW Bro Ralph Littler as the first Senior Warden and W Bro John F Childs as the first Junior Warden. The sponsoring, i.e. Mother, Lodge was Abercorn Lodge No 1549, sadly erased in 2012, originally meeting in Stanmore and more latterly at the Harrow District Masonic Centre.

The name ‘Herga’ was taken from the ancient Saxon name for Harrow, which signified a temple. Interestingly and how much of a coincidence it might be, is open to conjecture but there just happens to be a small village named Herga in the Udupi district of Karnataka in India and it has a temple of considerable importance on a small hilltop!  Now, our Saxon Herga is likewise on a hilltop and the name is first recorded in 767 as Gumeninga hergae.  A suggested meaning is heathen temple of a tribe called the Gumeningas.

Before the Consecration meeting closed six candidates were proposed for initiation at a later date. They were:

With the exception of the first-named, all were initiated into Freemasonry on 16th March 1895.  Subsequently the Revd Welldon was initiated, along with three other candidates, at a specially authorised extra meeting (technical term: ‘Emergency Meeting’) on 17th May 1895.

Thus it can be seen that right from its very early days the Lodge was receiving members who either lived or worked in the Harrow area, thereby justifying the case envisioned by  seven senior Masons who met in July 1894 to consider the oft-mooted suggestion that a local Lodge for local men in Harrow was desirable.

Some notes regarding the early connection with Harrow School are apposite.  The Revd Welldon had been Master of Dulwich College for some two years before he took up the position of headmaster of Harrow School in the summer of 1885, a post which he held until 1898, in which year he was not only invested as Grand Chaplain of the Province of Middlesex but also was appointed Bishop of Calcutta, soon becoming Metropolitan of all India and the Island of Ceylon [Sri Lanka today].  He had been ordained as a deacon in 1883 and as a priest in 1885, and whilst at Harrow had held a number of clerical positions.  Sadly poor health led to his resignation from the Calcutta appointment in 1902, when he returned to England and subsequently took up other senior appointments in the church, becoming Dean of Manchester from 1906 and of Durham from 1918.

The last of the candidates initiated in March 1895, Bro William Halliday, although not so eminent, was to have a longer and in many ways more enduring connection with the Lodge. He was the Workshop Superintendent at Harrow School and he served the Lodge well by designing and crafting much of the furniture owned by the Lodge.  Some of his work, which is on indefinite loan to the Harrow District Masonic Centre, can still be seen in various parts of the Centre, and are identifiable by the Herga name being carved on them.  Indeed, the furniture was much admired and was used for Provincial meetings for many years.  Bro Halliday never became Master of the Lodge but regularly attended the meetings, eventually dying in 1931 at the age of 94.

Bro Arthur Fillmore went on to become the 12th Master of the Lodge in 1906 and subsequently became the Lodge Secretary in 1912, a post he held  until he died on 15th February 1940.

Unfortunately, no history as to the choice of the Lodge logo seems to have survived but it is clear the design was influenced by Harrow School’s own crest. 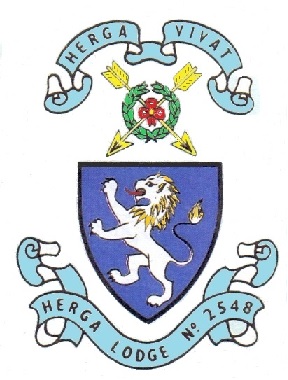 Joining us won't help you get your planning permission @JeremyClarkson, but you're welcome to join! I'm sure we can connect you to a farming or classic car Lodge... 🚜🚘 We think @MasonicMotors would be a great shout! (Some pictures below from their 1st meeting!) #Freemasons pic.twitter.com/sxw2nlTsNl

🫱🏽‍🫲🏼 Did you Meet the Assistant Grand Master Sir David Wootton? 🏅👑 Find out about Sir David’s life from being Lord Mayor of London, leading the Universities Scheme, being a top City lawyer and his life-long commitment to rowing! 👁️ Watch it here ➡️ solomon.ugle.org.uk/course/vi… pic.twitter.com/cV2RroRtSZ

A Brother has been honoured with the British Empire Medal (Civil Division) for services to the community in the London Borough of Hounslow particularly during the Covid 19 period. loom.ly/lybYPaM #brother #hounslow #britishempiremedal #servicetothecommunity #freemasonry

🤝🚪🧭 Thinking of Proposing a friend into #Freemasonry? Signing the Form is the start... You'll prepare them for their initiation and support and them through their early years. Read the #paper here ➡️ solomon.ugle.org.uk/mod/resou… #DailyAdvancement #MasonicKnowledge #Freemasons pic.twitter.com/vTykOdi5Sv

🗨️💬 UGLE Worldwide: A view from the Districts on #SolomonLive 🇨🇾🌍 Meet RW Bro Michael Hadjiconstantas, District Grand Master of Cyprus, who will share his insights into UGLE Districts and tell us about the customs and traditions of Freemasonry in Cyprus. pic.twitter.com/tKm4bvv6a3

🕯️ Have you just been Initiated? Or know a Brother who has? 👣 You've now taken your first step on a long journey of discovery. 👁️ If it's a bit of a blur, read the #paper on Making sense of your Initiation here ➡️ solomon.ugle.org.uk/mod/resou… #DailyAdvancement pic.twitter.com/900kiofFsD

🗨️💬 Meet the Assistant Grand Master Sir David Wootton on #SolomonLive 🏅👑 Find out about Sir David’s life from being Lord Mayor of London, leading the Universities Scheme, being a top City lawyer and his life-long commitment to rowing! pic.twitter.com/kLRnf729ml

Really great to see so many friends at the Middx PGO Club meeting this evening after a lapse of 2 years . And to witness the Province donate £12,000 to @CHAPSHealth It’s good to be back 😀😀👏👏 pic.twitter.com/crW4H2QWvX

UGLE ANNOUNCES RENUMBERING OF LODGES In response to modern developments, it has been decided that all Lodges will, from September 1st 2022, renumber in order of seniority. Details of new numbers for affected Lodges may be found here ➡️ ugle.org.uk/ugle-announces… #Freemasons pic.twitter.com/GuuQnMbQKO

🌎🌍🌏 Did you catch "Masonry Universal" - our fascinating interview with @UGLE_GrandLodge's 'Foreign Secretary' VW Bro Lt Cdr Paul Engeham? He enthralled us with anecdotes from his journey across the world of Freemasonry. You can watch it here ➡️ solomon.ugle.org.uk/mod/book/… pic.twitter.com/FeQaCStA7N